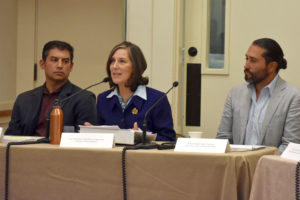 The more than 200 people who showed up Monday night at a Santa Ynez Valley church to hear details of a tentative agreement between Santa Barbara County and the Chumash regarding 1,400 acres called Camp 4 were not happy with what they heard.

Almost all of the 20 or so people who spoke during the public comment period expressed frustration and irritation that no more information was provided than what was posted online Friday afternoon in a summary of the long-anticipated agreement. (Click here to read full article)