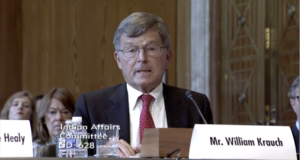 (WASHINGTON DC)  – In specially arranged testimony today, Bill Krauch –  long-time Santa Ynez Valley resident and Chair of the Santa Ynez Valley Coalition – urged a Senate Committee to reject a bill that will allow the Chumash tribe to build a massive development on Camp 4 over the objections of the community.

Krauch walked the Senate Committee on Indian Affairs through the back-story that led to special interest bill, H.R. 1491, which “affirms” a controversial Bureau of Indian Affairs decision paving the way for the tribe to build a 143-home subdivision and 12,500-foot meeting hall with 250 parking spaces – eight times what is called for under building codes.

The Camp 4 fee to trust decision came on the last day of the Obama Administration. An acting BIA Administrator rejected various administrative appeals filed by Santa Barbara County, the Coalition, individuals and other citizen groups to keep the agency from taking the 1,400-acre parcel into a federal trust and “annexing” it to the Chumash reservation. Using its sovereign power, the Tribe could then build without paying property taxes or complying with strict state and local zoning and environmental regulations.

“Our administrative appeal right was taken from us in the waning hours of the Obama Administration in the dark of night,” said Krauch. “The BIA approved the Chumash fee-to-trust application notwithstanding the strong local opposition and without a sufficient record to make a final decision.”

Krauch said that the legislation, introduced weeks after the BIA decision, was used to force County officials into signing an “anemic” Memorandum of Agreement for the development adequate safeguards – and expires in 22 years, after which the Tribe is allowed to do anything it wants with the land.

“It was a product of a badly flawed negotiating process between the Tribe and Santa Barbara County, where the Board of Supervisors was effectively bullied into signing a weak, fiscally irresponsible MOA, whose limited restrictions sunset in just over two decades.”

Krauch said that if Congress didn’t reject the bill, it had to overhaul it to address community concerns, Among the revisions he requested:

In closing, Mr. Krauch reminded the committee that the coalition is not in opposition to the Tribe or to the development of tribal lands.

“We understand and recognize that the Chumash are our neighbors, and we are committed to helping them address their housing needs.  All we are asking is the same thing that is asked of every non-tribal resident in the Valley — that they help us conserve its character and resources for all future generations.”