Attached is the presentation and other materials disseminated at the meeting.

The Santa Ynez Valley Coalition will host a community meeting Thursday, April 27, to update area residents on recent federal and local developments regarding the fee-to-trust transfer of the Camp 4 property from the Santa Ynez Band of Chumash Indians to the federal government. (Click here to read full article)

(Santa Ynez, Calif.)  The Santa Ynez Valley Coalition, a broad-based community organization of concerned citizens will host a community meeting on Thursday, April 27th to update area residents on several recent federal and local developments regarding the “Fee to Trust” transfer of the Camp 4 property. The public will also be afforded an opportunity to ask questions at this meeting.

Federal action to take the 1,400-acre agriculturally-zoned Camp 4 property into Trust on behalf of the Chumash Tribe would give the Tribe the ability to commercially develop this land in any manner it sees fit irrespective of local land-use plans. That federal action is under challenge in federal court. END_OF_DOCUMENT_TOKEN_TO_BE_REPLACED 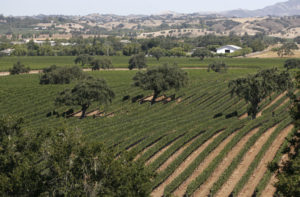 Two Santa Ynez Valley residents have filed a brief asking the U.S. Department of the Interior assistant secretary of Indian Affairs to pull the land called Camp 4 out of federal trust and convey ownership back to the Santa Ynez Band of Chumash Indians.

In their brief filed March 20, Brian and Suzanne Kramer allege the Jan. 19 decision to take the land into trust for the tribe is not final because it was challenged by them and two others — Lewis P. Geyser and Robert B. Corlett — within the allowed appeal period. (Click here to read full article)

(Santa Ynez, Calif) In the closing hours of the previous Administration, the Bureau of Indian Affairs (BIA) took administrative action to allow the Santa Ynez Band of Chumash Tribe to expand their reservation to include the 1,400-acre agricultural preserve known as Camp 4.

Below is a statement from the Santa Ynez Valley Coalition regarding this recent development:

Recent news reports that the Chumash Tribe “is cleared to build on ‘Camp 4’ land” are premature and false. On the last day of the eight-year Obama Administration, the acting Deputy Secretary of Interior approved the Chumash’s fee-to-trust application for Camp 4 property, extinguishing the administrative appeals of community organizations and individuals.  That action is still subject to legal challenge. In fact, Santa Barbara County has already filed suit in federal court.

The Santa Ynez Valley Coalition remains steadfastly opposed to “fee-to-trust” for the Camp 4 property, and are committed to fighting it at every step. We are confident that this last-minute, backroom political deal will not prevail.  If this action were to stand, it would allow the Chumash, despite their statements to the contrary, to build another Casino or commercial development without complying with existing land use plans. Development of the Camp 4 agricultural preserve in this manner would impact the property values of existing residents and businesses and burden taxpayers with higher taxes to meet the infrastructure demand of potential development that would occur.

All we are asking is that the Chumash join with us as neighbors to work together to develop a solution to address their need for housing and a community center while protecting the economy, environment, and water resources of the Santa Ynez Valley. What the community is asking of the Tribe is expected of every other property owner.

We will endeavor to keep the community apprised of our steps in the future as we stand up for the Santa Ynez Valley. This is not a done deal.

The Chumash are free to build homes on Camp 4, subject to zoning regulations and property taxes, like the rest of us. If they insist on pursuing the federal option, to include Camp 4 in their reservation, then they should accept the corollaries; their reservation (including casino) is a sovereign nation. Therefore, we should establish gates at each exit from the casino. At those gates, we should pursue exhaustive customs and immigration investigation for anyone coming in from that sovereign nation. It is possible that that might have a negative effect on patronage of their casino. (Click here to read rest of the article)

The Santa Ynez Band of Chumash Indians will pursue a federal bill that would allow it to annex Camp 4 to its reservation after the previous bill, House Resolution 1157, died when it wasn’t passed before the 114th Congress adjourned in December. (Click here to read full article)